What do colors mean in logo design | Graphic Design Tips

we're going to be discussing the meaning of color in design and how you can use color to change perceptions subconsciously. So studies show that a product's color has 60 to 80% influence over a customer's purchasing decision. So that just goes to show. How much of a really big deal choosing a color is and why you shouldn't just choose a color arbitrarily because you like it.

So let's first begin by talking about red you can see some really famous brands that have red as a major part of their design. Red gives off the feeling of something very aggressive, so you'll see red a lot. In a car type of advertising. So you see that there for fiat. and fiat really has kept red as a very iconic part of their logo.

other car companies nowadays have kind of maybe moved away from red a little bit as far as the actual color of their logo. but. Cars like Honda,,, started out with a red logo, and now, now really they have kind of more. Just get away from the red, but that was something they started with.

You also see energy, so that's, a really great way to show energy. Red's a really powerful color. Red's also provocative, in that you see. You know, we associate red with, a color that really evokes a lot of emotion

we also see red in situations where attention is being called to something so cautious.

so red is very attention-grabbing  Red is also very sexy. That's what we think of when we think of a color that says sexy.

You think of red. , you remember the scene in the. The lady with the red dress. That's just the iconic idea of what sexy means in red. , and you see it a lot in food advertising too.

I think probably a lot of that is due to the fact that it is. Energetic and attention-grabbing. so we see it so, so often in food logos. , and as you can see, a lot of other varied types of logos use this color. It's the second most popular color for a logo, in fact.

Purple. You can see there are not as many examples of purple logos here because purple isn't used quite as often because it has a pretty specific meaning.

Purple has a feeling of royalty. So we do see, the Cadbury and the Hallmark really having that idea of the royalty kind of going along with it, especially in Hallmark with the Crown.

but we also see. With purple nostalgia, which I really get the nostalgic feeling from, the La Lakers logo because it still has a very retro feel to it.

They've had that logo, for quite a while. , so I really get the purple nostalgia. Connotation there.

you also get mystery, which I think comes across pretty well for the sci-fi logo and spirituality.

A lot of religious iconographies you'll see depicted with colors of purple a lot of the time because of that link to royalty as well.

We also have blue. Now blue is the most popular color for a logo, and there's a good reason for that. A lot of the meaning of blue is very, very positive connotations. so trustworthy is one of the first. Things that come to mind whenever you think of Blue.

And so it's a great color for most companies. Most companies wanna be seen as trustworthy.

Blue also is a symbol of security. So we see blue a lot for things like banks, and things that you want to be secure, like data technology.

we see Blue as a dependable color really synonymous with trustworthiness and security.

we've got Green Next and Green has some similar meanings to Blue but is a little bit less popular, especially nowadays, I would say, because green has taken on this meaning of this, kind of movement towards clean energy. And so there are so many things being used that are green.

but green is a great color for a logo. It depicts wealth. , A lot of times banks will actually stray away from using green because it is such a powerful connotation. You don't really see a lot of banks with a green logo because the first thing you think of a lot of times when you see green is money.

Affluent brands. So we see Land Rover, low cost, and Starbucks here being brands that you associate with maybe being more wealthy.

We also see it for health, which kind of goes along with clean energy, idea, and prestige. Kind of going back to the wealth idea, it's a great color for a logo that you want to feel. 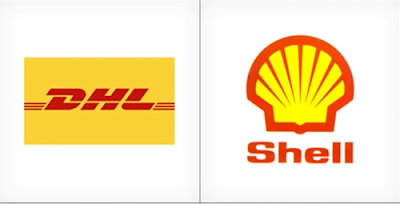 Now, yellow is our next color. We have. And you can see that yellow is also very attention-grabbing.

yellow is seen as a very positive color, a very happy color. We get light with yellow, so a lot of times you'll see that for things that are wanting to be depicted as something that you kind of look towards.

We've also got orange. And orange is a very interesting color. It really reflects the vitality, so you'll see it in different types of brands.

It's almost, I would say orange is seen almost as kind of an alternative type of color because it's a great mix between yellow and red. So you get a lot of those differences. Connotations kind of from each and meeting in the middle.

Orange is seen as fun. So you have the sophistication of red with the fun, really playful, and maybe even younger feel that yellow has playful again.

really coming through in like the Nickelodeon logo. The PTO one we see down. exuberant. That is a great way to describe Orange.

So our next color is brown. And brown isn't really used very often and part of the reasoning for that is that brown has some really specific meanings and connotations as well. We see a lot of these candies, and logos because we have that strong association.

Association with chocolate. , but Brown also has an earth-like feel, which I think is a lot of why we see it in, Louis Vuitton, because of the leather feeling that they are going for.

We get a very natural feeling with Brown. Simplistic. So it feels a lot of times like that is a very basic color. You know, you kind of think of the color of dirt.

It seems very simple. , but also brown is the color of durability, which I think is very interesting and kind of shows why maybe UPS chose to have Brown as part of their

logo colors in that they are saying that they kind of. Connote this sort of durability in the service that they're providing. 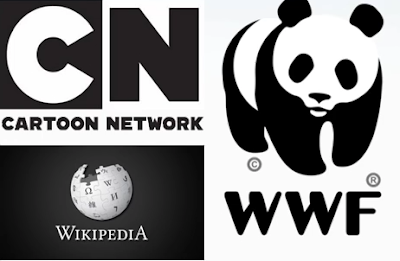 Black is a very common color for logos, and we see it for a lot of different types of logos.

In the first part of the design phase when you're designing in black  you'll design something and then you might realize, you know, this, doesn't really have a color that makes a lot of sense for it, so let's leave it black and white.

that's gonna be the most neutral a lot of times at least in certain cultures. Now, we'll, what we'll come to find is that it's. In some cultures the meaning of it is, but a lot of these logos are black and white.

And because of that, we're able to kind of have a balance there so we can see that black means prestige.

So we definitely get that from Georgio Armani value is denoted by black timelessness and sophistication, but also death. Now that is a Western cultural perception as we'll learn in a moment.

Now we also have white and white in Western culture, which again, shows purity, nobility, clean.

And soft are some different meanings for white. And you can see some of the different logos that we're maybe more used to seeing as white. But again, , it's a black-and-white type of thing. A lot of times it's one of those very reversible types of things. So when you'll see this, , a lot of times it's going to maybe be one color or the.

Now let's talk really quickly about western versus eastern perceptions. So in the Western world, white is linked with purity and innocence. Red is linked with anger, and black has that negative death connotation.

in some scenarios, a lot of times in fashion, especially black is gonna be perceived as, something that's good, but whenever.

Have it in a certain context. Black is seen as, oh, you know, maybe that's a little bit scary. In Eastern culture, you don't see that in eastern culture.

White actually has the link to mourning and death, not black. Red is actually linked with happiness. So a lot of, you know, in Chinese culture you see so, so much red and yellow also.

So those are both linked with happiness, whereas red, Uh, anger in Western culture.  we, don't have a negative view of the color black in Eastern culture the way that we do here as much. So that's something to keep in mind when you're choosing those colors, , especially if it's a polarizing type of service that you Working for that company.

it might be something that you don't wanna choose a color that's going to be just black or just white at least primarily, green is regarded as one of the safest colors to use in both markets, and blue also has a pretty universal meaning. So green has been used a lot in technology brands.

We also learned that it's a very. It's, it's used quite a bit and part of that is just because it is such a safe color to use in both sides of the world. So I think for our logo

Notification
This is just an example, you can fill it later with your own note.
Done